Iryna Yavorska, right, and her mother, Galyna Ivanova, practice making the blinchiki-stuffed pancakes they plan to sell on a food truck in Hikone, Shiga prefecture, on April 22. Blinchiki are a popular Ukrainian dish. | The Yomiuri Shimbun

Iryna Yavorska, 50, was prompted to start the business by her desire to take steps towards an independent life in Japan by promoting the food culture of her home country. But her main motivation, she said, is to show her gratitude for Japan’s support.

Yavorska started looking for money on a crowdfunding site on May 2 to raise money to buy equipment and other items. She aims to operate her food truck in “pre-opening” at the end of May.

Yavorska and her mother, Galyna Ivanova, 80, came to Japan from Kharkiv in eastern Ukraine. His daughter, Kateryna, 31, and Japanese son-in-law Takashi Kikuchi, 28, were already living in Hikone. Currently, Yavorska and her mother are staying in an accommodation facility provided free of charge by the prefectural government. They received help from Kateryna and Kikuchi as well as donations from local residents.

Yavorska, grateful for such generous support, came up with the idea of ​​starting a food truck business, hoping to use her cooking skills to do something back for the community. She decided to sell blinchiki, a Ukrainian home cooking dish made by wrapping ingredients in a pancake. Versatile blinchiki can be a sweet treat when filled with fruit and cream, or a meal when filled with chicken and mushrooms. Some ingredients are hard to find in Japan, so Yavorska asked her husband, a 53-year-old chef who stayed in Kharkiv, for advice.

Blinchiki is also a special dish for Yavorska as she prepared it for Kikuchi when he visited her home in Kharkiv for the first time.

“She tried to get along with me through her home cooking. I felt a mother’s kindness through the blinchiki,” Kikuchi said. 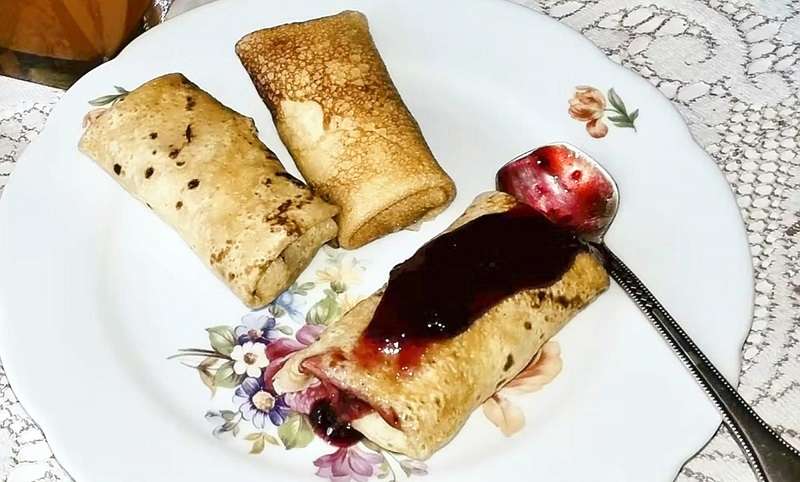 Yavorska changed her residency status to one that allows her to work in Japan, and Kateryna obtained a food hygiene supervisor certificate, which is required to operate a catering service. Yavorska speaks only Ukrainian and Russian, but plans to study conversational Japanese in order to serve customers.

“It energizes us to hear Japanese people say ‘delicious’ and ‘thank you,'” Yavorska said at a press conference in Hikone on May 2. “Please come to Hikone for a taste.”

By the end of April, 820 people had fled Ukraine to Japan. Due to the language barrier and other reasons, finding a job in Japan is difficult. However, Yavorska hopes to launch more food trucks in other parts of Japan with other Ukrainians who have fled their country once her business kicks off.

Yavorska plans to first operate its food truck in an area near Hikone Castle, a national treasure, and other locations in Shiga Prefecture. The truck will be leased from an incorporated body consisting of the Hikone Chamber of Commerce and Industry and other entities. She intends to purchase her own truck as soon as funds become available. She is seeking money on crowdfunding site Campfire with the aim of raising 3.6 million yen by June 10.

For Ukrainian doctors, treating wounded Russians is a necessary evil

New Jersey, United States – The IoT IAM market report includes the upcoming challenges and opportunities in the market. It ensures a strengthened market position and a growing product portfolio by providing all the important details related to the market growth. It reveals some of the key insights and focuses on the impact of the […]

Financial planners encourage students to explore possibilities within a dynamic discipline. Diane Hirschhorn, left, emphasizes a point during her speech as her colleague Raquel Hinman (Fin’92), founder and director of Hinman Financial Planning, listens. Over 100 students registered for the event, a discussion and networking session for future financial planners. Like many aspects of finance, […]